SiteWhere supports interacting with remote systems or devices by accepting HTTP requests and processing the payloads to produce SiteWhere events. This is accomplished by using a socket event source combined with an HTTP socket interaction handler to properly parse the HTTP request and send a 200 OK HTTP response to the caller.

To accept HTTP requests, a socket event source must be configured for the tenant that will receive the data. Open the SiteWhere administrative application and choose Manage Tenants from the user dropdown in the top-right corner (note that the user must have tenant administration privileges). From the list of tenants, choose the tenant that will be receiving the HTTP data.

NOTE: The HTTP socket interaction handler is only available in SiteWhere 1.7 and above 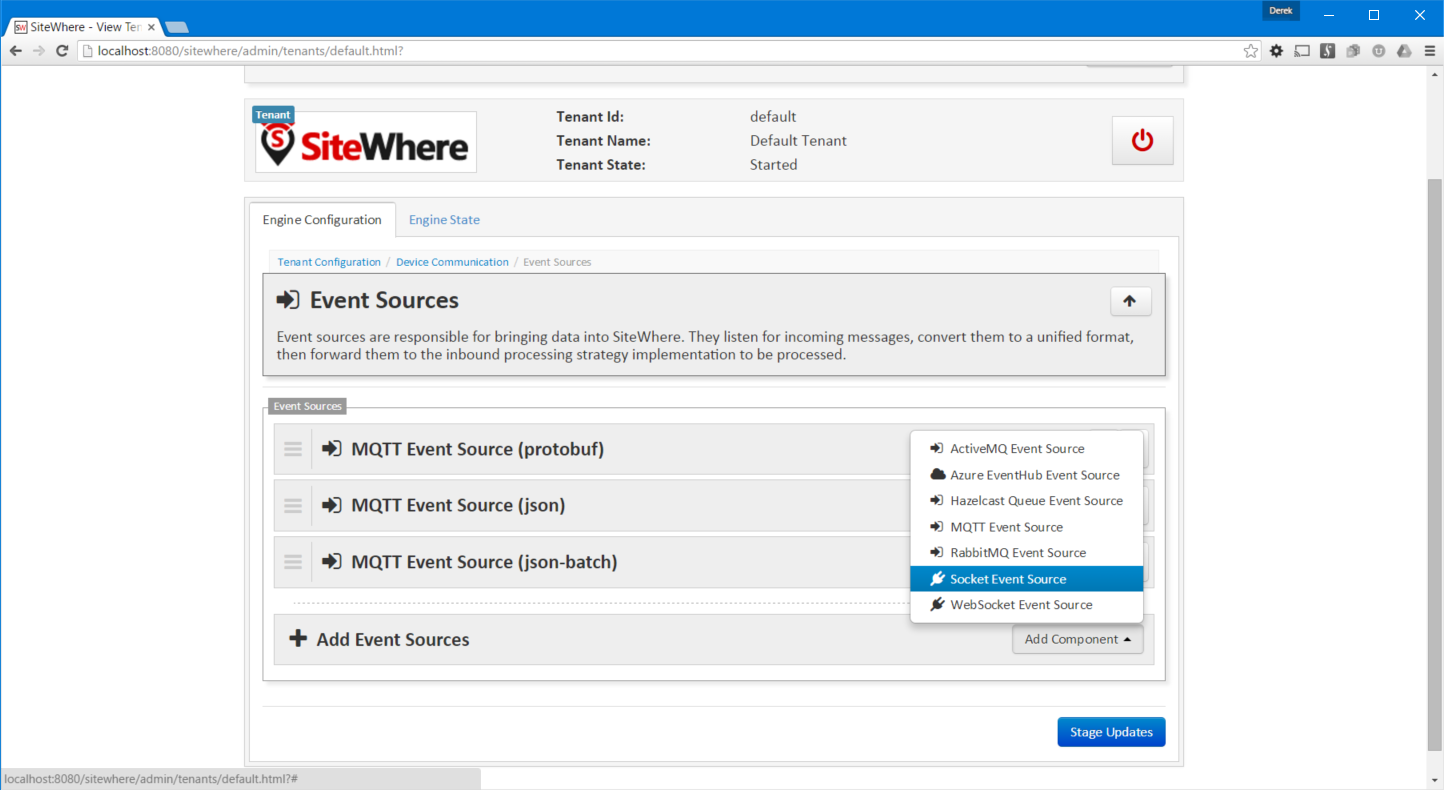 The socket event source can be configured to listen on any available server port. Also, multiple threads can be used to process the socket requests in parallel. An example configuration is shown below: 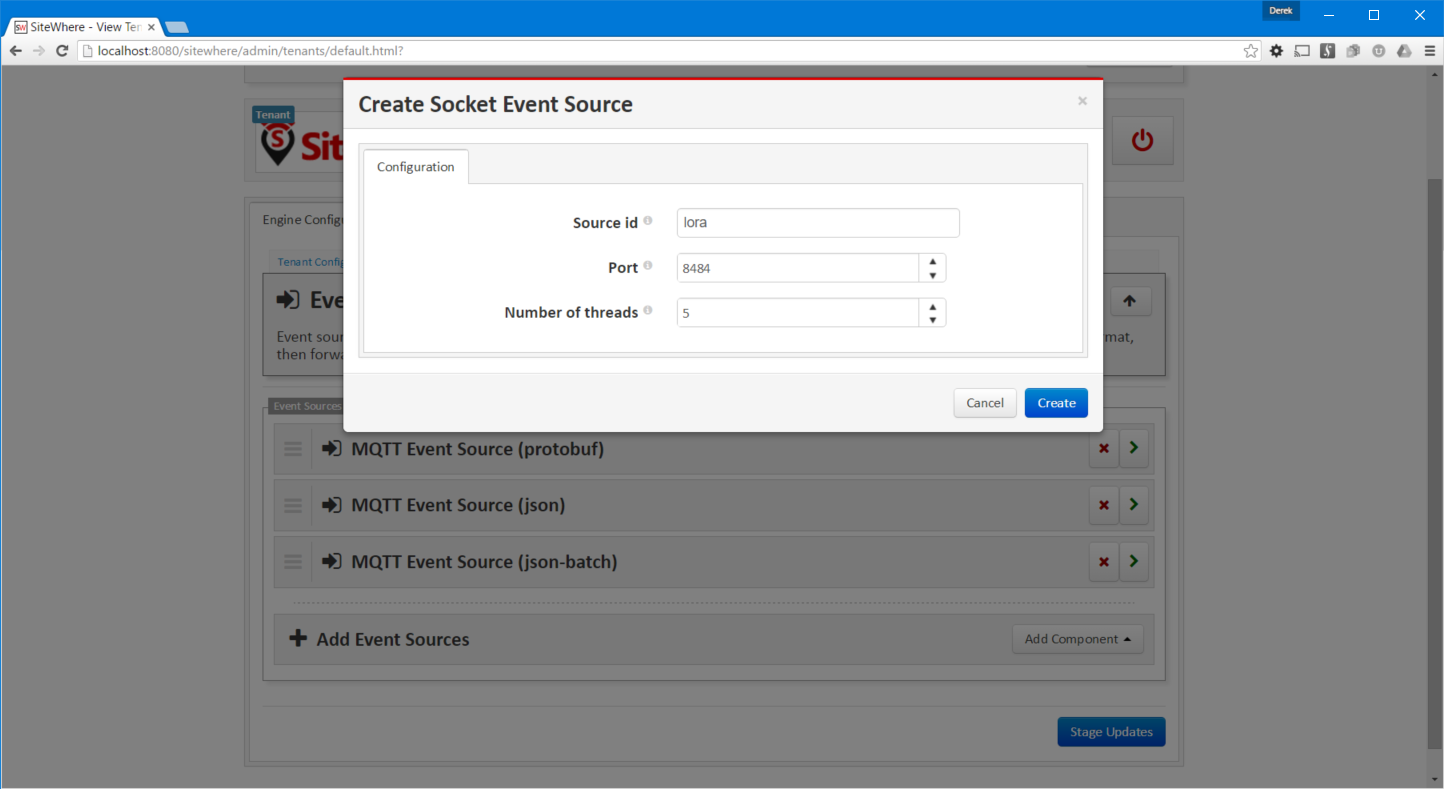 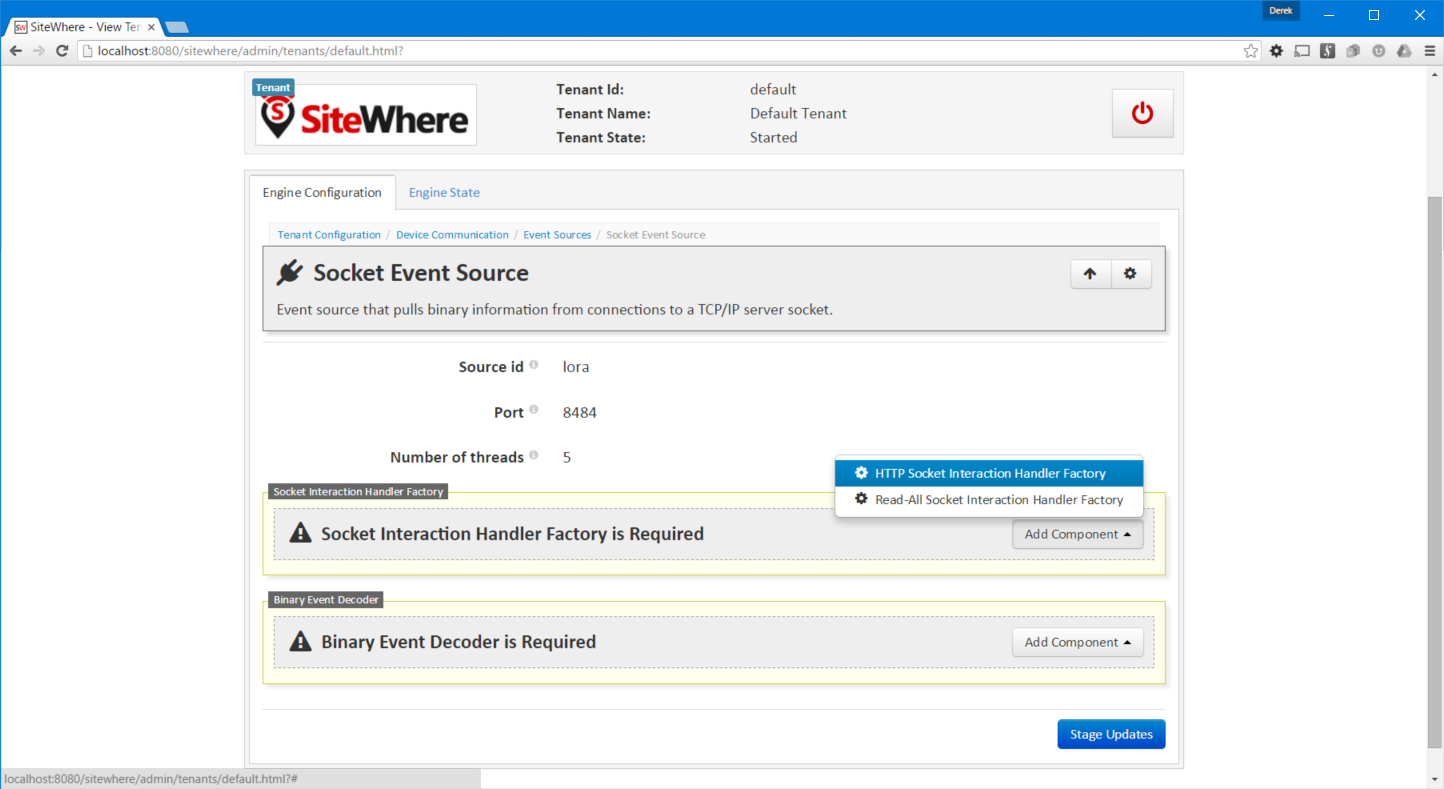 To parse the HTTP payload into SiteWhere events, a binary event decoder will need to be assigned to the event source. In this case, the HTTP payload will be parsed by a Groovy script so choose Add Component in the binary decoder block and choose Groovy Binary Event Decoder as shown below: 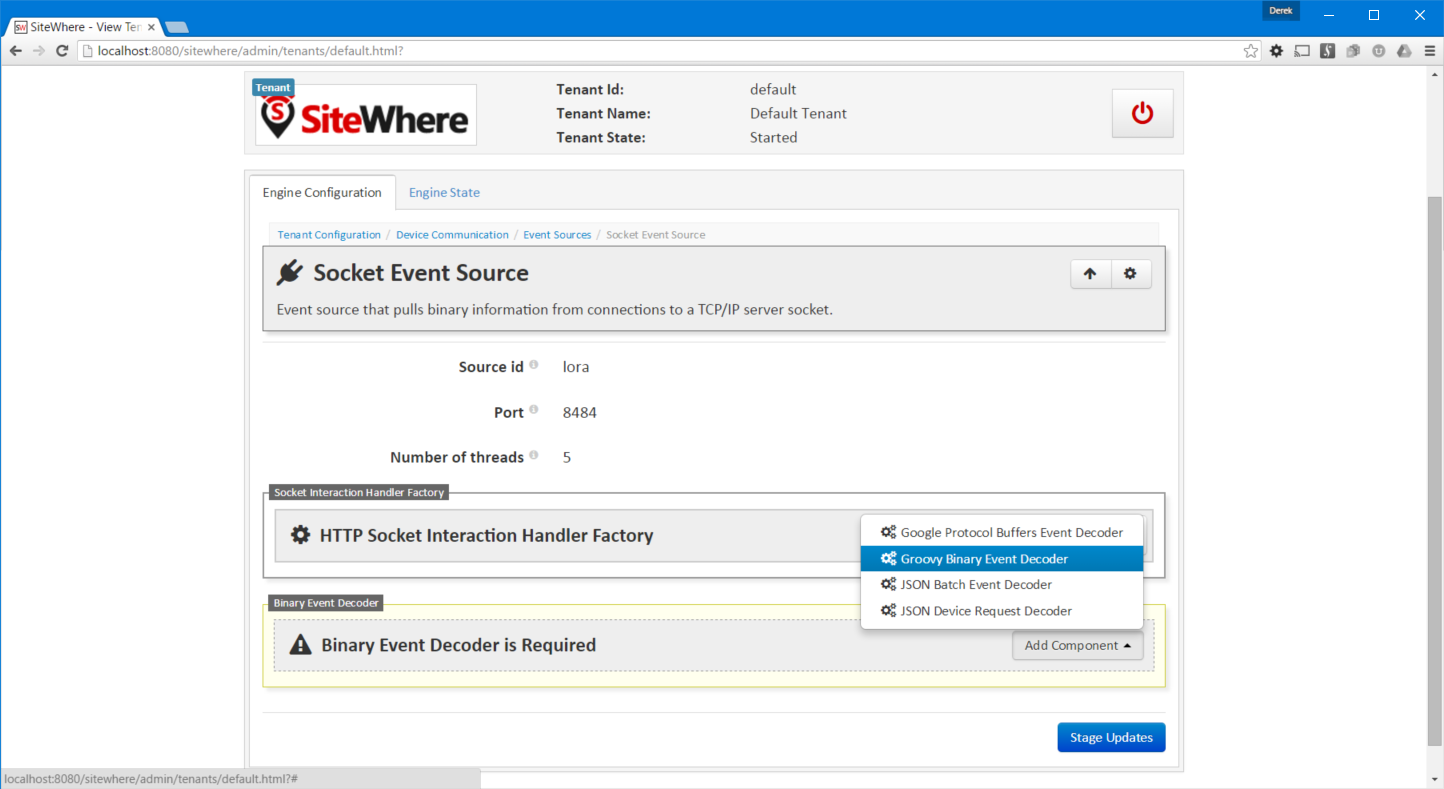 The Groovy script will be loaded from the conf/global/scripts/groovy folder by default. For the script name, choose decodeOSS.groovy as shown below: 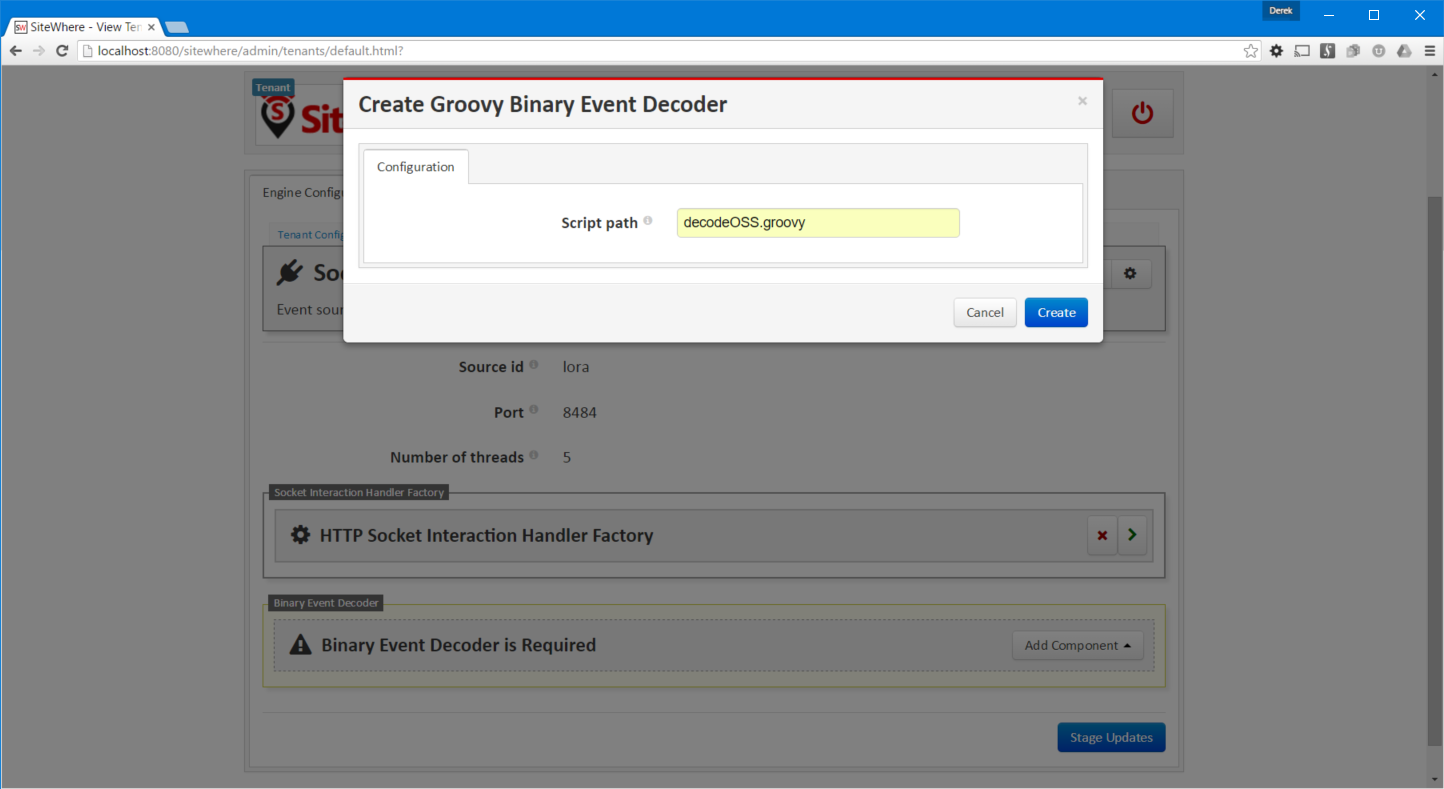 Send Sample Data to the Socket

To illustrate processing, we will send a sample JSON payload to the socket we have configured. The code included below will use the Spring REST template and Jackson libraries to send a sample payload using the HTTP protocol. The example is constructed as a JUnit test so that it can be dynamically executed from an IDE such as Eclipse.

We assigned a Groovy binary decoder to the socket event source, so the payload of the HTTP request will be forwarded to a Groovy script for processing. The script will parse the binary data by unmarhaling the JSON payload and extracting the fields we are interested in using for SiteWhere events. Copy the contents of the script below into a new file conf/global/scripts/groovy/decodeOSS.groovy and save the changes. Since Groovy is dynamically recompiled, we do not have to restart the tenant to see the updates to the script.

Before sending data to SiteWhere, a device and assignment should be created so that the data can be recorded. Create a gateway device with a hardware id that matches the id field being passed in the JSON payload. Create an assignment for the device so it can start receiving events.

To test the HTTP processing script, use the JUnit test from earlier in the tutorial to send a sample payload to the socket. In the SiteWhere logs, there will be messages indicating that the JSON payload has been parsed and RSSI and SNR have been extracted.

Open the SiteWhere administrative application, choose the default site, and open the assignment that corresponds to the gateway device you created previouusly. Clicking on the measurements tab will show the data that has been parsed from the HTTP request.

This techique can be used to post data directly from devices or external systems to SiteWhere. Depending on the amount of inbound traffic on the port, it may be advisable to increase the number of threads dedicated to processing. By using a Groovy script for the processing of data, any form of data can be interpreted. For example, payloads in custom binary formats can be interpreted by changing the script to expect the given data format.