SiteWhere supports integration with the popular openHAB open home automation project. The SiteWhere openHAB plugin (available on the downloads page) allows openHAB data to be stored to SiteWhere as if the openHAB system was a composite device. SiteWhere includes a device specification for an openHAB virtual device, allowing commands to be sent back to openHAB as the result of processing.

Install and Configure the Plugin

Begin by installing openHAB as detailed in their getting started guide. Install the runtime, addons, and demo application. Start the system and open the demo application to verify that the installation was successful.

Download the SiteWhere openHAB Addon and copy it into the openHAB addons folder. In the openHAB configurations folder, edit the openhab_default.cfg file and add the following section if it is not already there:

Note that the SiteWhere Addon and configuration settings will be part of the openHAB distribution starting with 1.8.0

The following configuration values may be specified to change the default behavior:

Before starting SiteWhere and openHAB on the same machine, it is important to note that both run on port 8080 by default. The port for SiteWhere can be updated to avoid a conflict when binding. Open the conf/server.xml file and look for the following:

Change the port to another value such as 9090.

In order for SiteWhere to be able to send commands to openHAB, a command destination needs to be configured to send output back over MQTT. The default configuration uses the following:

Based on the default data loaded the first time SiteWhere starts, there will be a specification with UUID 5a95f3f2-96f0-47f9-b98d-f5c081d01948 for an openHAB virtual device. Note that the above configuration routes commands for that specification over MQTT as expected by the openHAB addon.

Once the openHAB addon and SiteWhere have been configured, start the openHAB server. Messages in the openHAB log should indicate that the agent was able to connect with SiteWhere as shown below:

After a few seconds, values for the various demo items should start to be persisted into SiteWhere. Open the SiteWhere administrative console, click on the default site, then click on the green arrow next to the openHAB Virtual Device at the top of the list. Click on the Measurements tab, and data for openHAB items should appear in the list as shown below: 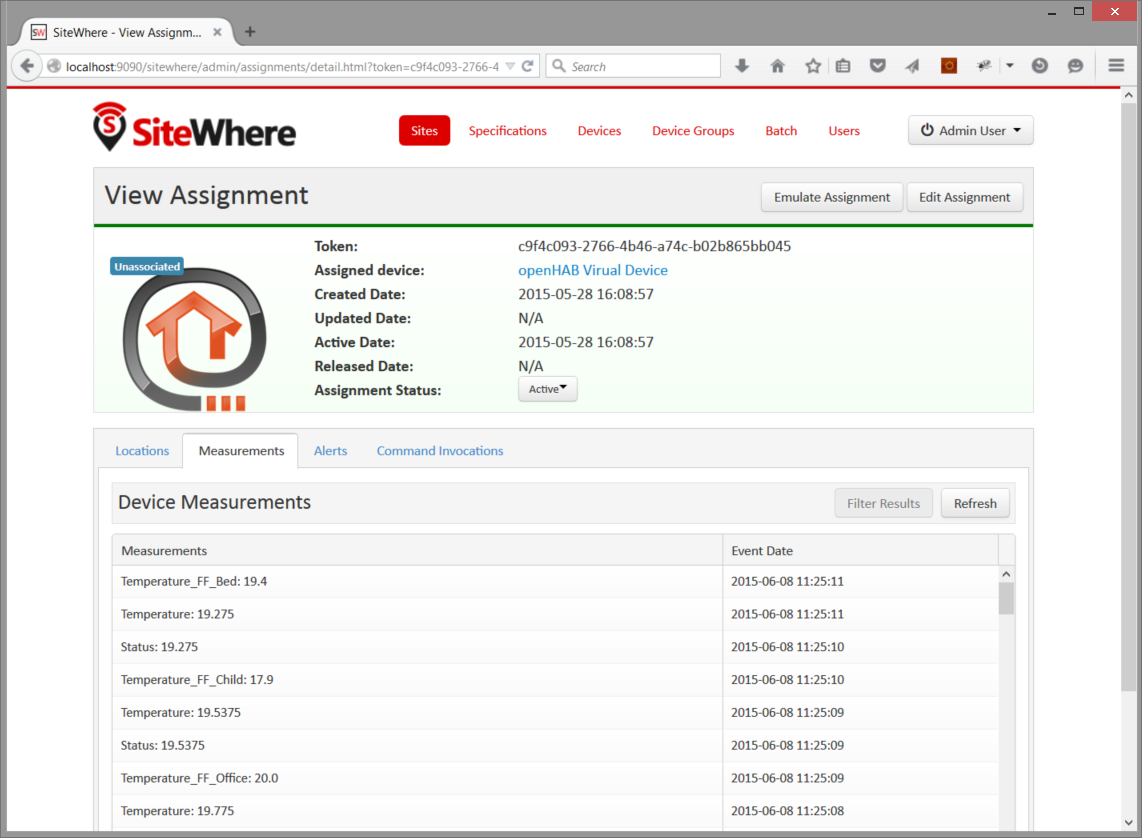 SiteWhere can also send data to openHAB to affect its managed items. For instance, to turn on the light switch in the first floor bathroom ceiling, we can send a command via the SiteWhere administrative interface. From the assignment page for the device, click on the Command Invocations tab. Click the Invoke Command button and leave the dropdown with sendOnOffCommand chosen. Set ItemName to Light_FF_Bath_Ceiling and the command to ON, then click Invoke. 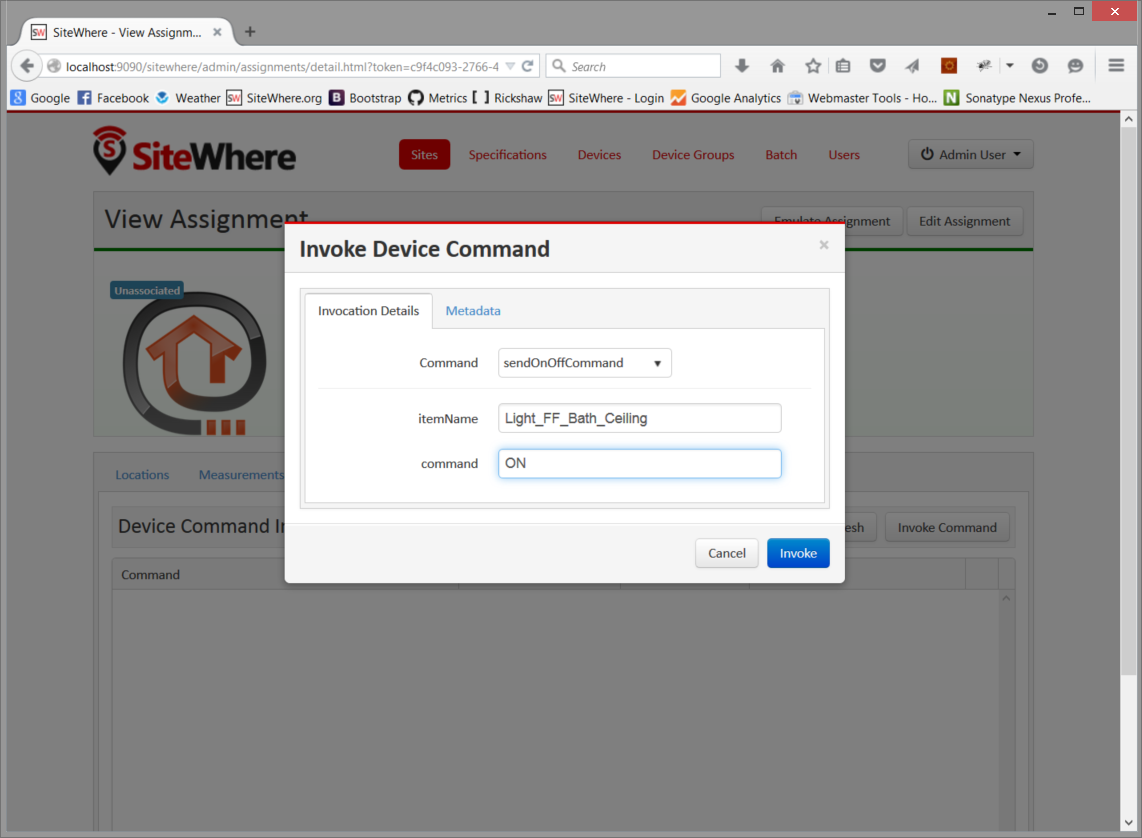 SiteWhere integrates with Siddhi for complex event processing and may be easily configured to integrate the functionality with openHAB. For instance, consider a use case where the light switch in the child’s bedroom can be used as an SOS device. If the light switch is flipped more than three times within a ten second period, all of the lights in the house should come on. The logic can be configured by adding the following XML to the SiteWhere configuration:

The logic watches the AlertStream which is a real time stream of alerts processed by SiteWhere. The logic triggers on alerts with type openhab.onoff:Light_FF_Child_Ceiling which is the indicator for alerts from the light switch in the child’s bedroom. The event matches if the alert message is ON. The first match is followed by two more matches with the added stipulation that the alerts originate from the same device assignment. Otherwise, with multiple openHAB instances, children in three different houses could flip the light switch and trigger an alert. If the trigger condition is met, a new event is sent to the SOS stream. The groovy-stream-processor allows a Groovy script to be executed to process the SOS events. It looks for a script named siddhiCreateAlert.groovy in the sitewhere/conf/sitewhere/groovy folder. The script below will create a new SiteWhere alert as the result of the SOS event:

Note the the Groovy script can be changed while the SiteWhere server is running and it will be recompiled on the fly. Bring up the openHAB demo interface and flip the switch in the child’s bedroom off and back to on three times in less than 10 seconds. A system generated alert of type SOS will show up in the alerts list.

Rather than creating an alert, the system can also take action based on the SOS event and fire an event back to openHAB. In this case, all lights in the home should be turned on. Replace the content of the above script with the following content to create the command:

Now go back to the openHAB interface and flip the switch three times to trigger the event again. Note that SiteWhere sends a command and all of the lights in the home are turned on.

Now that openHAB data can be pulled into SiteWhere and SiteWhere can fire events back into openHAB, there are many other possibilities that open up. For instance:

The list above only scratches the surface of what can be done. Play around with combining the building blocks SiteWhere provides and take your IoT applications to the next level!