This tutorial uses temperature/humidity data from a DHT11 sensor and adds SiteWhere server logic processing to dynamically generate alerts and issue commands back to the device to flash an LED when alert conditions exist.

This tutorial builds on a Node-RED flow created in a previous tutorial. To build the initial flow step-by-step, follow the tutorial here. You can also take a shortcut and import the flow by opening the Node-RED web application, choosing the toolbar in the top-right corner, choosing import, and copying the content below via the clipboard. After placing the nodes, the flow is ready to work with.

As of SiteWhere 1.6.1, server processing logic is supported directly via Groovy scripts that run in the outbound processing pipeline. Older SiteWhere versions were able to forward events to other frameworks such as Mule Anypoint for logic processing, but logic was not directly supported in the SiteWhere pipeline. 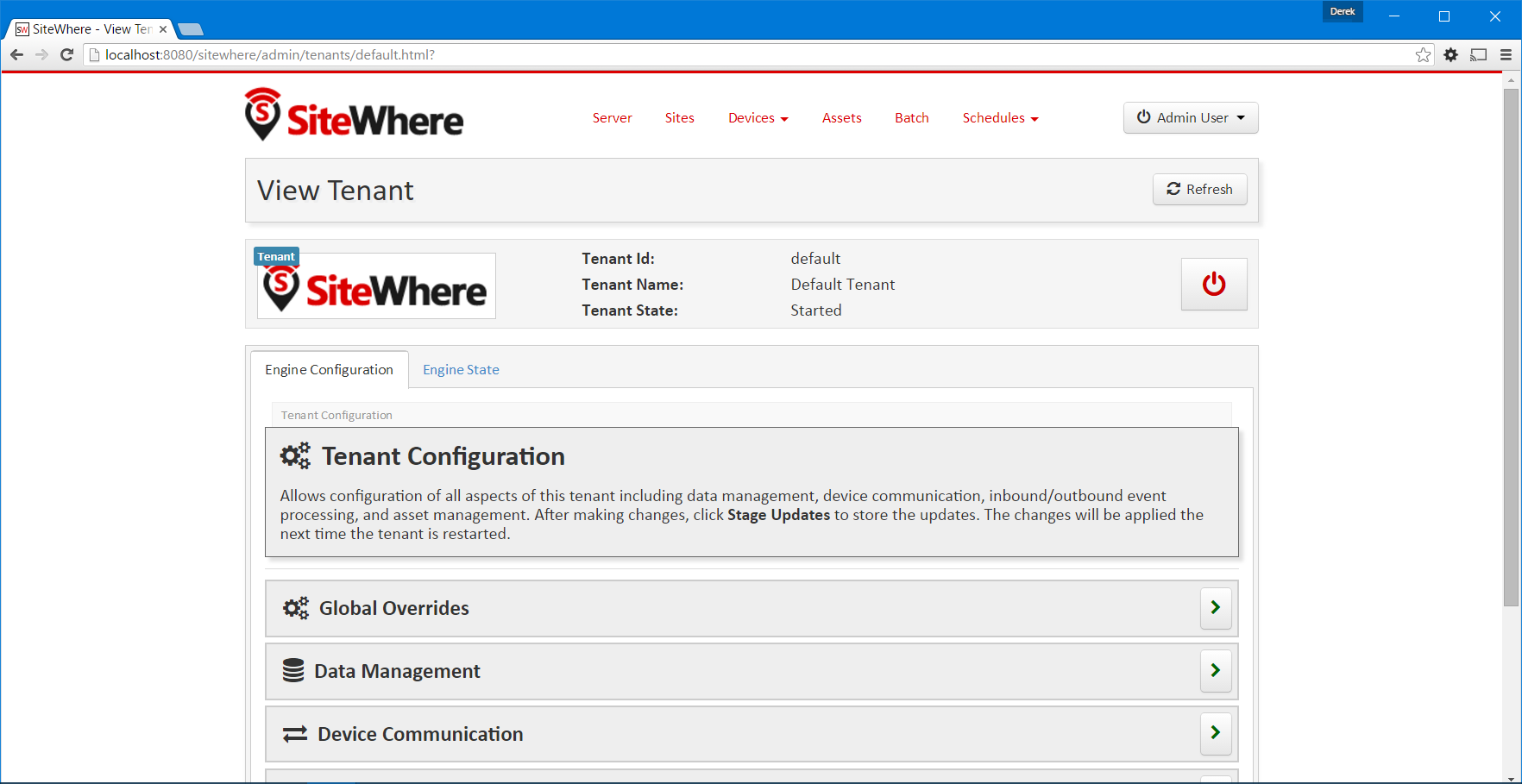 Scroll down and click on the Event Processing catetgory, then click on Outbound Processors. Add a Groovy event processor to the pipeline by clicking the Add Component dropdown and choosing Groovy Processor from the list. Enter dht11-logic.groovy for the script path and click Create to add the processor. The new processor will be added to the end of the processing chain. The resulting list will look similar to the one below: 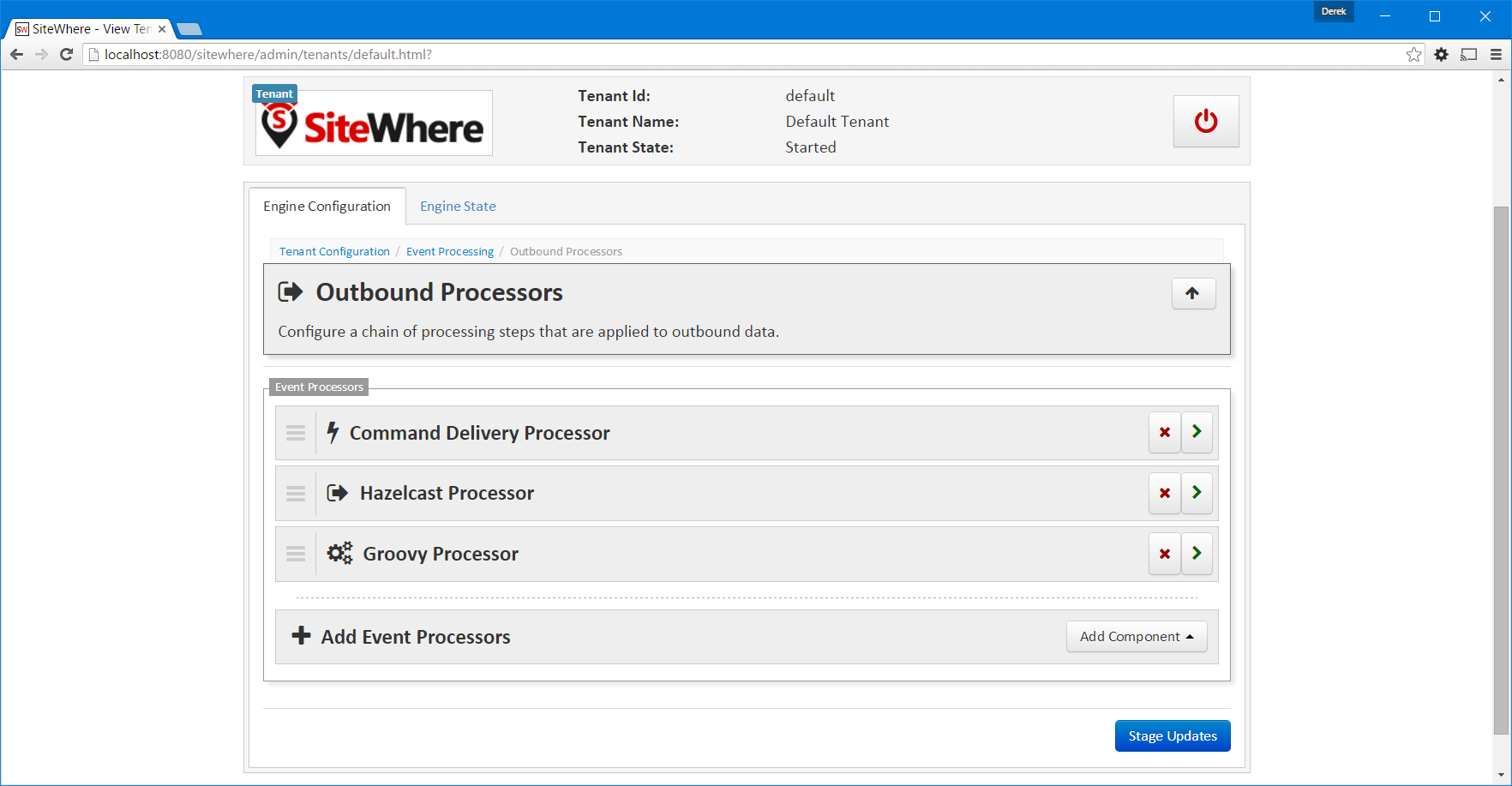 To apply the updates to the tenant, click Stage Updates, Ok the updates, then click the stop button on the right side of the banner to shut down the tenant. After it shuts down, click the start button to restart it. The tenant will now send all events to though the Groovy script for processing. Note that you can also add filters to the processor to limit which events are sent to it. If you have the flow already running in Node-RED, you will see error messages in the SiteWhere console indicating it can not find the Groovy script.

Add Logic to the Groovy Script

In your SiteWhere installation, navigate to the conf/sitewhere/global/scripts/groovy folder. This is the default root path for Groovy scripts. It is also possible to override the path for a given tenant so that the tenant’s scripts are isolated rather than global. Create a new file named dht11-logic.groovy.

The error messages in the SiteWhere console will stop since there is now a file where it expects it. Note that, because Groovy is compiled dynamically, changes to the script are immediately reflected in SiteWhere processing. There is no need to shut down the tenant or server to make changes. Edit the content of the script to contain the following logic:

Depending on your local environment, the humidity may be high enough to start generating alerts immediately. If not, you can blow on the sensor to raise the humidity and generate an alert. Note that the logic is creating a new alert which is stored just as other event data. It will show up in the tabular data for the assignment. It is also processed by the event pipeline just like any other alert, so it can be sent via Hazelcast or fed to Siddhi CEP processing.

Send Device a Command from SiteWhere

It often makes sense to issue a command to a device when an alert condition is encountered. For instance, if a water level sensor is triggered on a pool, a command could be sent to turn off water flow. In this example, we want to flash an LED on the Raspberry Pi if humidity is above a given threshold. First, we need to add a command to flash the LED. In the SiteWhere administrative application, click on Devices > Specifications and open the Node-RED specification from the list. Under the Commands tab, click the Add New Command button. Enter flashLed as the name, http://rpi.namespace as the namespace, and Flash the device LED as the description. We will not use any parameters or metadata for this example, but parameters can easily be passed along with the commands. Click Create to create the new command. SiteWhere can now send this command to any device that uses the Node-RED specification. 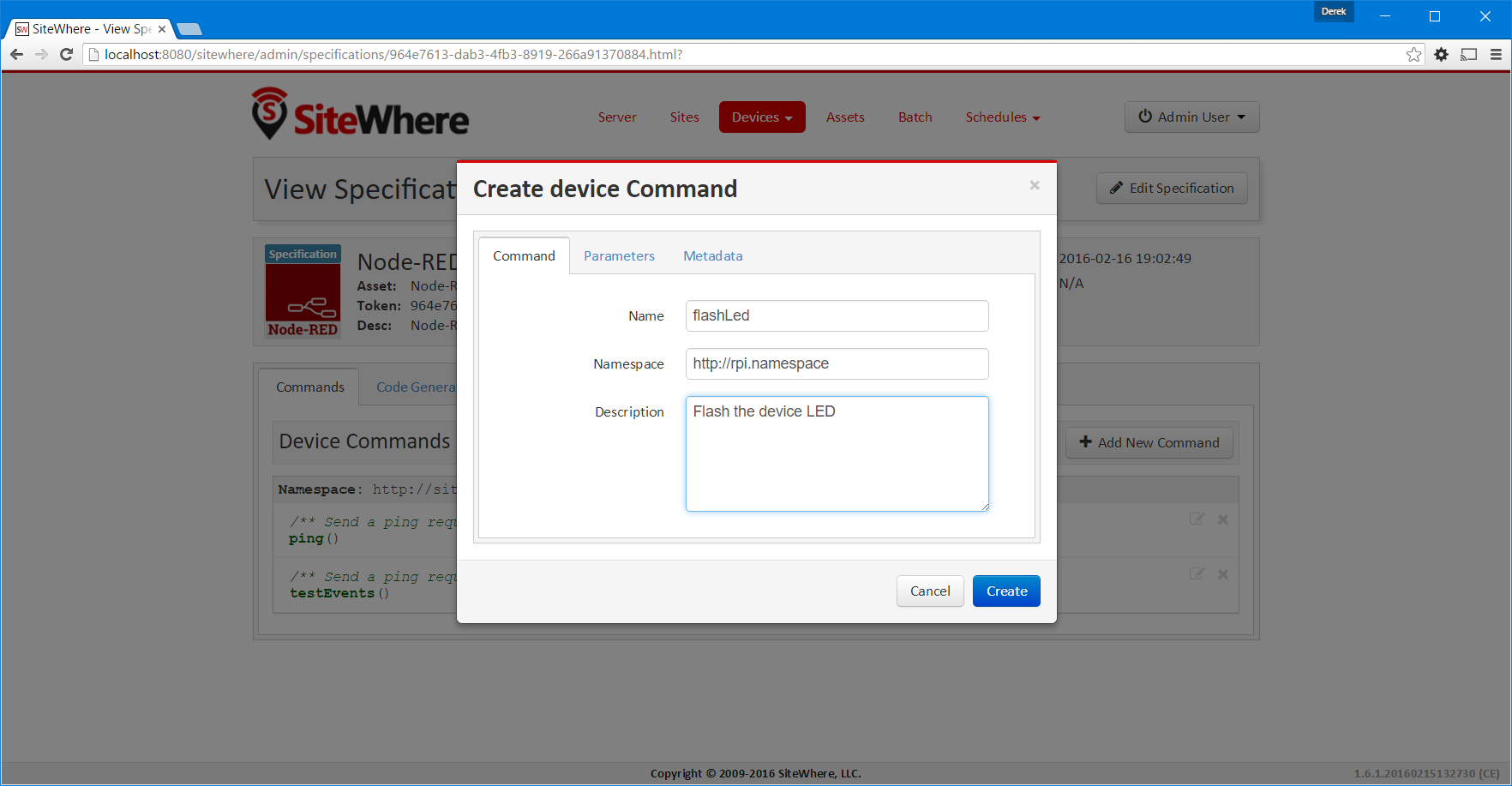 Add an LED to the Existing Circuit

To show the command being executed on the Raspberry Pi, we will add an LED to the breadboard and trigger it using GPIO pin 17. Below is the updated circuit diagram: 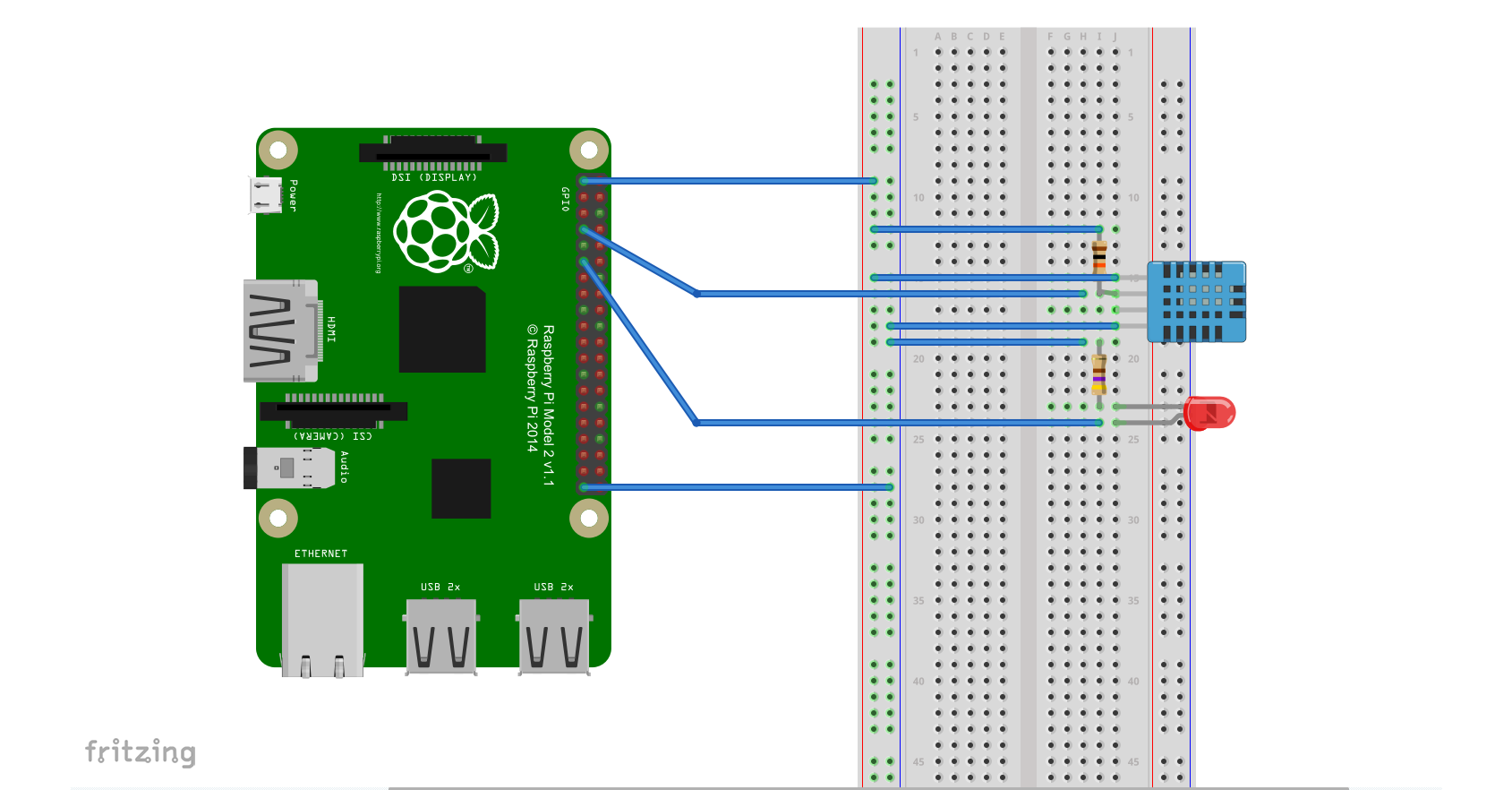 Now signaling pin 17 will turn on the LED.

Update the existing dht11-logic.groovy script with the following content which will both create an alert and issue a flashLed command if the humidity level exceeds the threshold.

A few new nodes need to be added to the Node-RED flow to handle the inbound command from SiteWhere:

Rename the nodes as shown below: 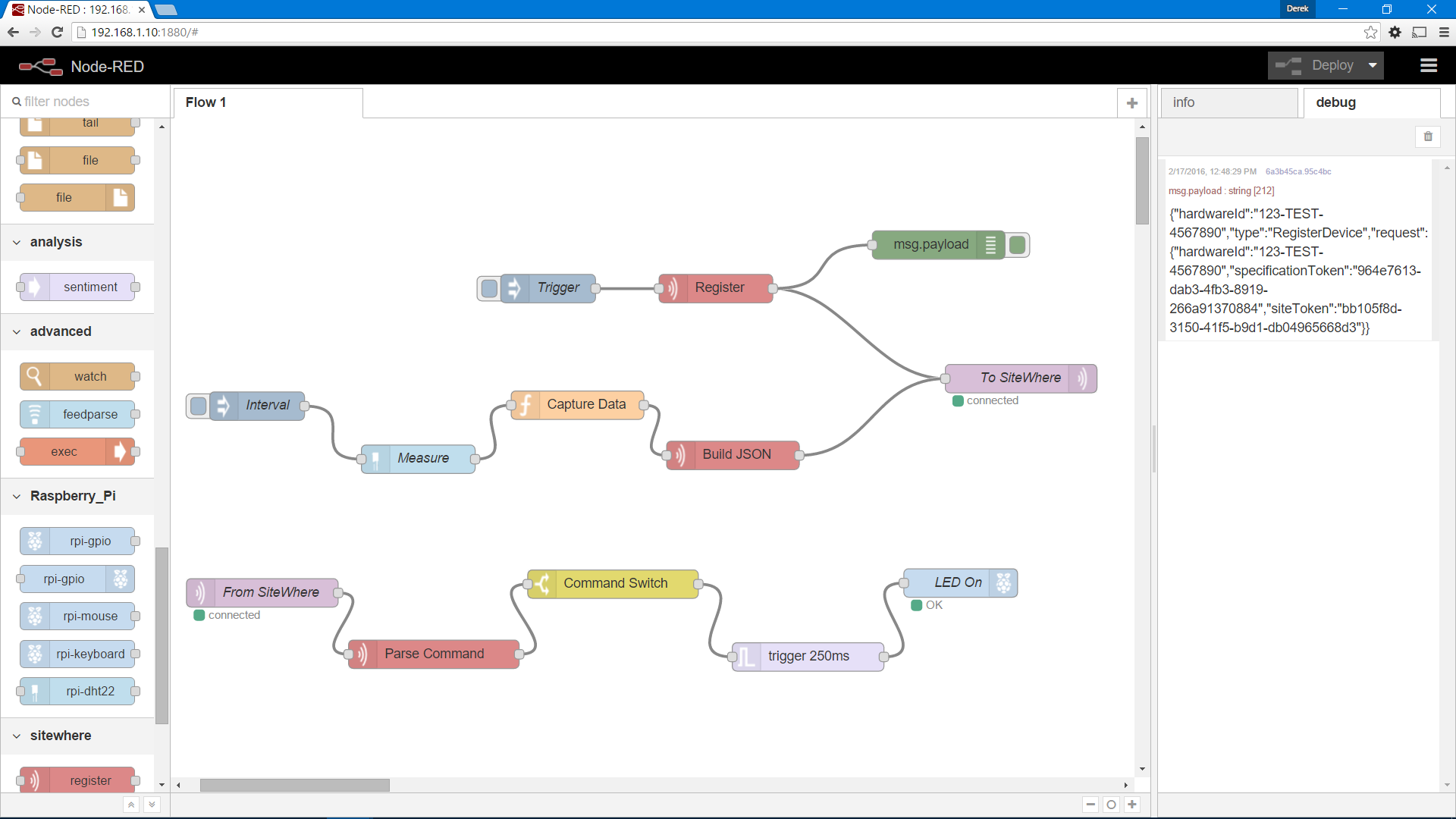 The inbound MQTT command node will listen on an MQTT topic (as defined in the SiteWhere tenant configuration) for commands for the device. Note that the topic name includes the device hardware id. Enter the same information as shown below: 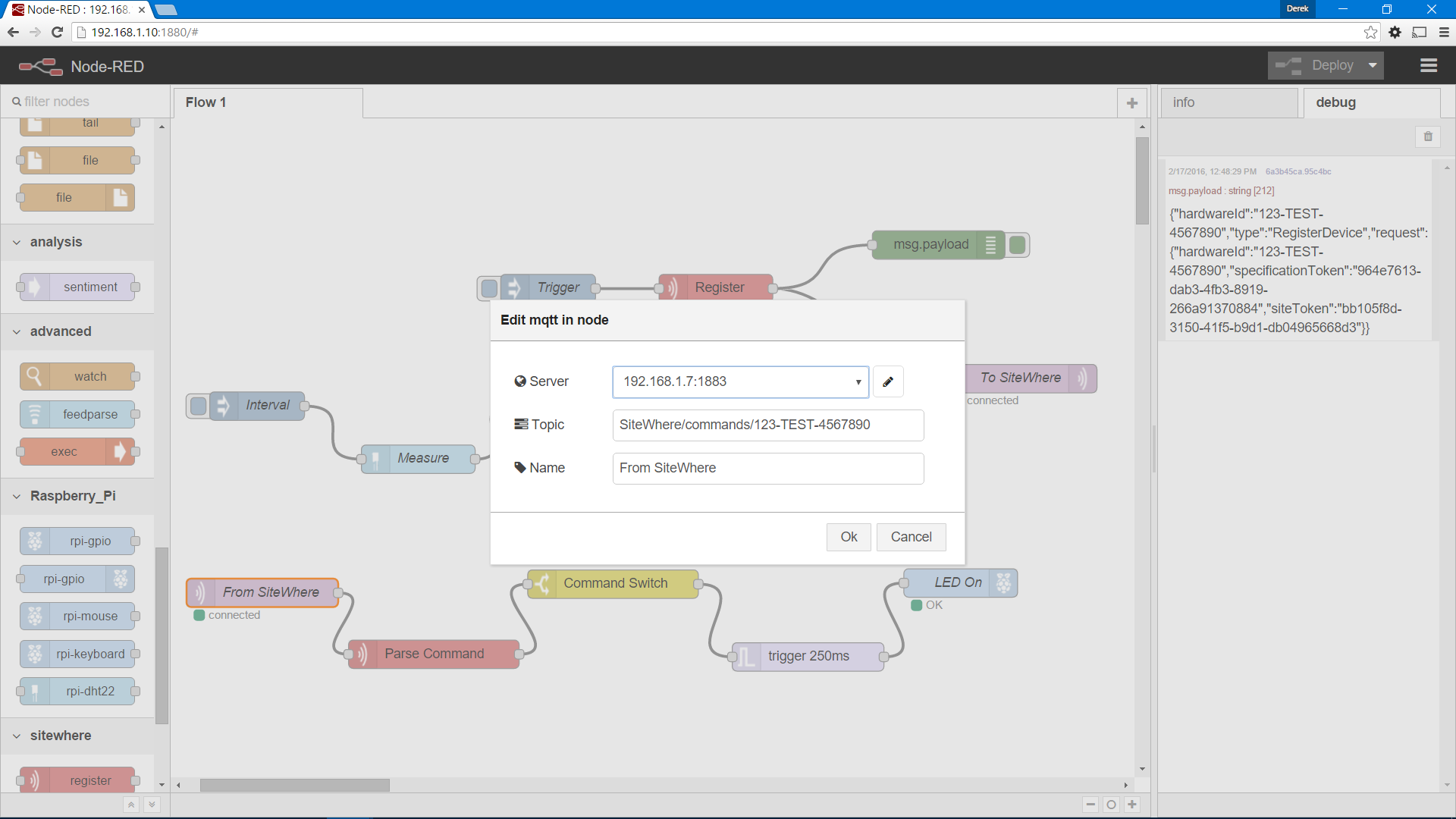 The node will listen on the topic and relay the JSON command payload from SiteWhere.

This node does not require configuration. It strips away many of the extra details included in the command message from SiteWhere and arranges the data so that other nodes can use it.

Since many different commands can be delivered by SiteWhere, we need a switch that chooses an output route based on the command name. Configure the node as shown below so that the flashLed command is routed to the next connected node. If multiple commands were being processed, there would be an output for each command coming out of the switch. 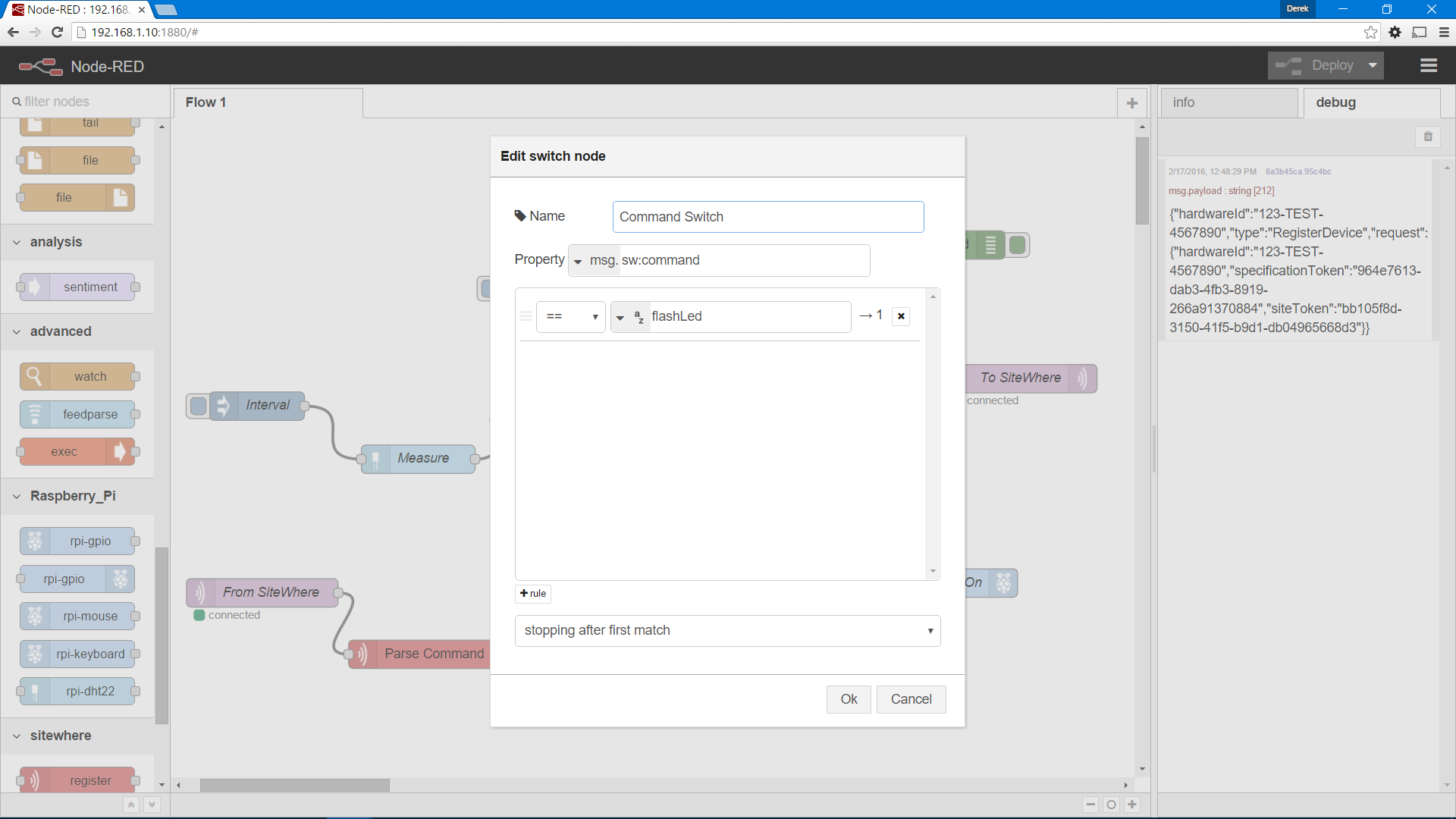 Note that the switch property is sw:command which is set in the SiteWhere command parser node.

The trigger node is used to send a high signal followed by a low signal at a future time. We will use it to trigger the LED to flash. When the flashLed command is received from SiteWhere it will keep the signal high for 750ms, then set it low again. If multiple messages are received, the interval will be extended. Set the configuration as shown below: 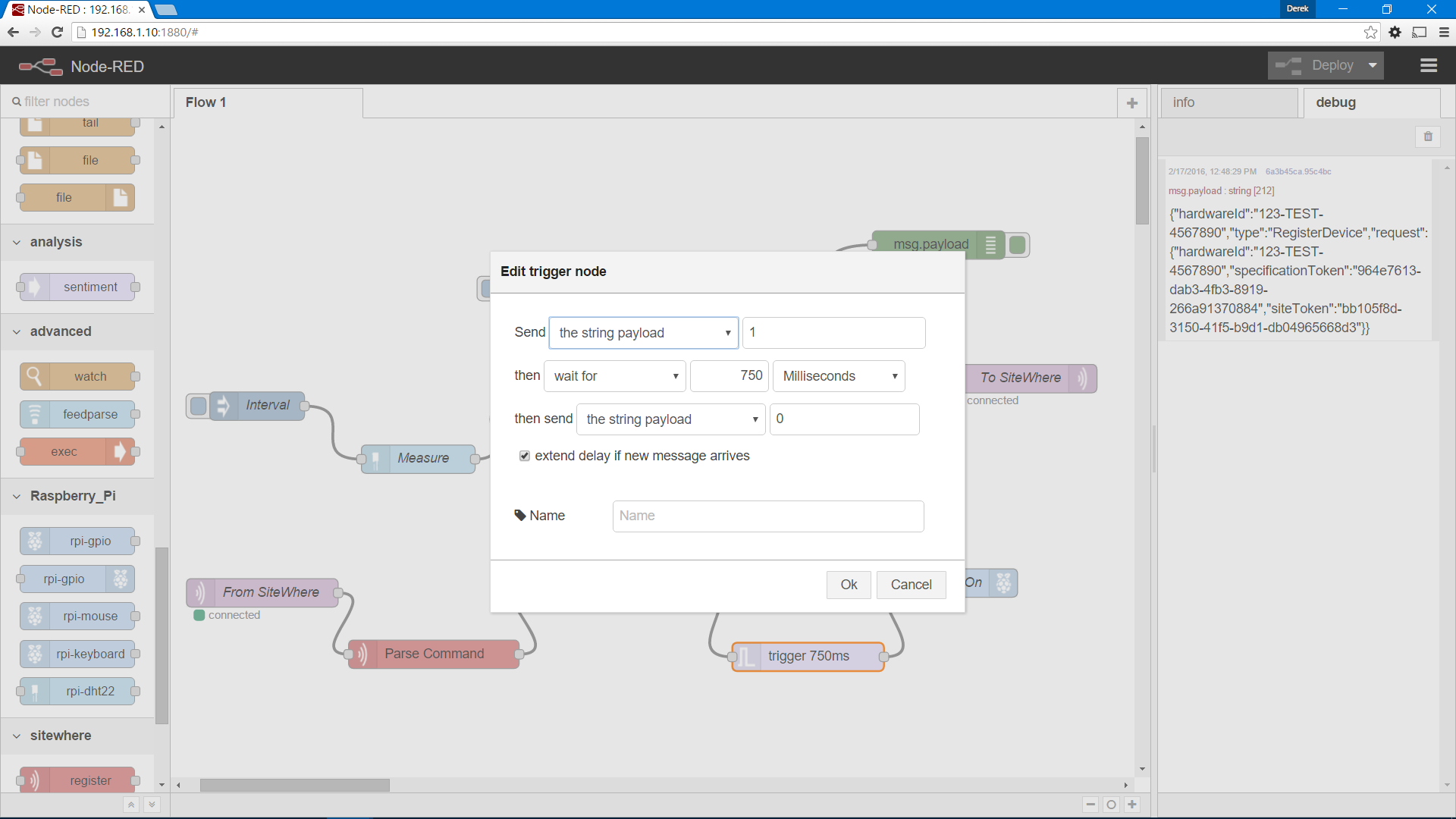 The GPIO node interacts with the pin on the Raspberry Pi to set its values. In this case, we are setting GPIO pin 17 to flash the LED. Set the configuration as shown below: 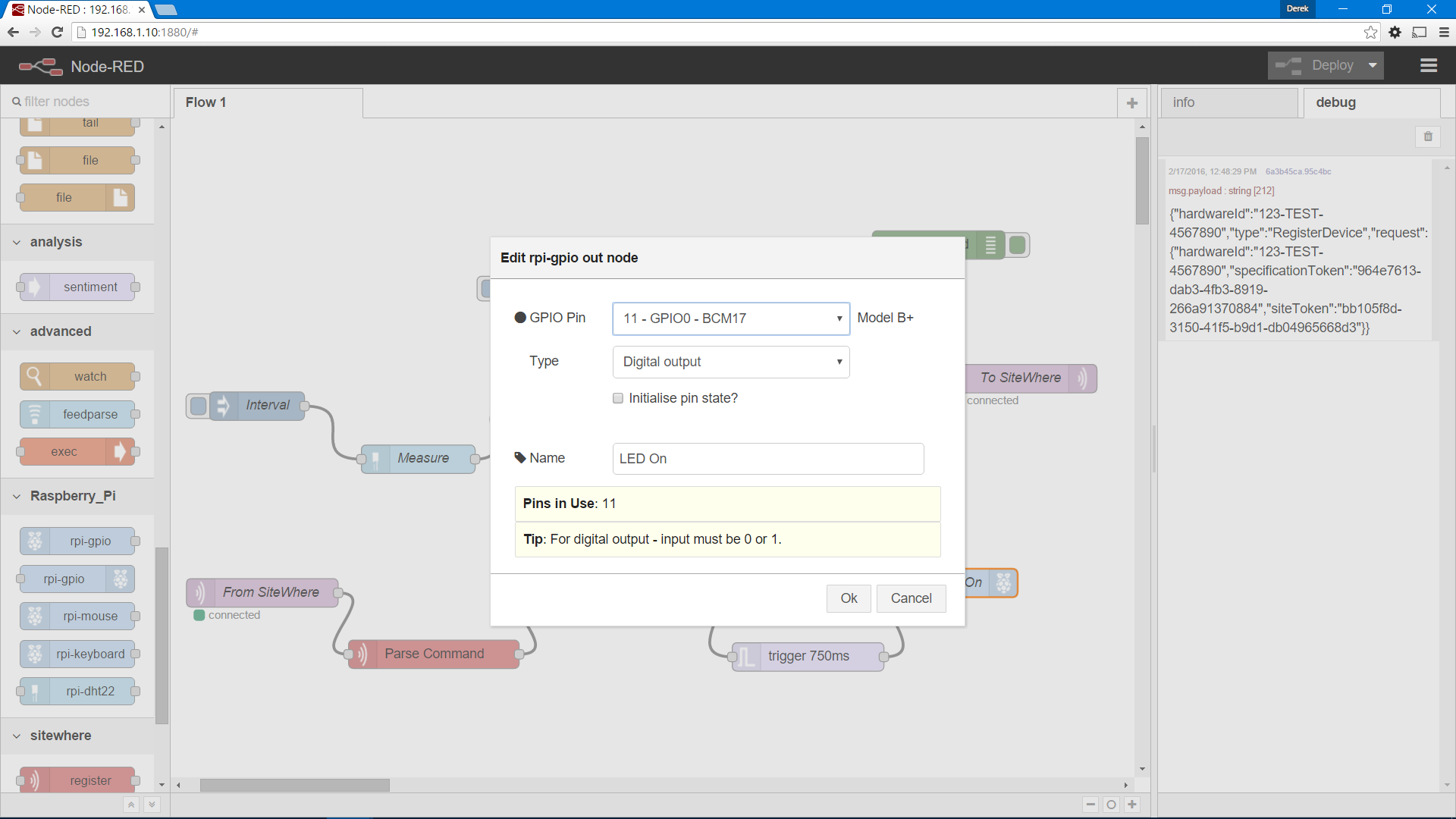 If you would rather not go through all of the steps to create the flow by hand, import the following for the completed flow:

Deploy the Changes and Test

Click the Deploy button in the upper-right corner of the web application to commit the changes made to the flow. Now the flow is ready to handle commands from SiteWhere. To test the configuration, raise the humidity to an alert level by blowing on the sensor. An alert will show up in SiteWhere and the LED blinks to indicate the condition.

We now have a complete round-trip flow that can register a device with SiteWhere, send temperature/humidity data, and receive commands based on logic processed on the server. Based on conditional logic in a Groovy script, we are able to generate device alerts and issue commands back to the device to take action.